This 1M/E live switcher has a separate mainframe and control panel, and comes standard with 16 SDI inputs, four SDI outputs, and two DVI outputs. It also features a variety of standard effect functions, including luminance and chroma keying, two DSK channels, two P-in-P buses, and two DVE channels. Ideal for medium-scale, multi-camera, on-air transmission and recording for broadcast studios, OB vans and image production applications. Addition of the optional AV-HS04M7D 3D SDI Output Board also enables 3D compatibility for switching effects such as wipes and mixes. And it features a number of display functions for 3D camera assist use.

The AV-HS450 supports a variety of HD/SD

This makes it ideal for digital cinema production

the input and outputof analog component

and various other signals.

Input/output formats compatible with the AV-HS450

by the standard input terminals of the AV-HS450.

These signals are not supported by the optional

The AV-HS450 is equipped with an SD/HD up-converter function for four standard inputs, and a dot by dot function for 16 inputs. Dot by dot input can be used for P-in-P display of HD images from SD footage without degradation. A video processing function with color correction is also provided for eight inputs.

Two P-in-P buses and four Aux buses are included. Borders and soft-edge effects can be applied to the P-in-P buses. In addition to a Cut transition, the Bus transition function (P-in-P bus and Aux bus* switching effect) also enables a Mix transition (Aux 1 only). Flexible operation is achieved by combining Aux buses and M/E sections.

* Embedded audio on SDI input signals can be passed through PGM, PVM, and MV.

A Wide Range of Transitions and Effects 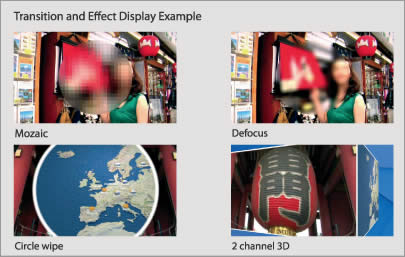 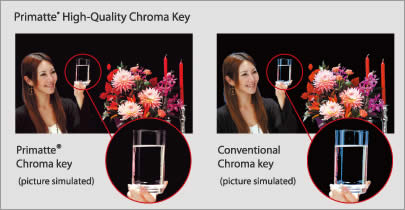 Linear, luminance and chroma keying are provided. Chroma keying employs the Primatte® algorithm, which is widely used as a plug-in for nonlinear editors. The same excellent Primatte® image quality that is used worldwide for movies, TV programs, music videos and commercials is achieved by the AV-HS450's real-time processing. Superior blue-spill processing naturally combines translucent objects, such as thin cloth and glass, with background colors. Extremely fine objects, such as individual
strands of hair, are faithfully reproduced. Two DSK channels are also provided to add borders, shadows, and other edge effects. 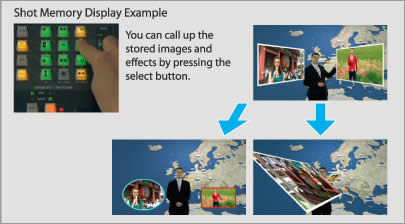 Up to 10 image effects, such as background transition patterns, P-in-P sizes and border widths, can be registered in shot memory for instant retrieval. The AV-HS450's Effect Dissolve function enables smooth switching from a current image to one of the images or operations registered in the shot memory.

Up to 20 Windows, Dual-Monitor MultiViewer Display 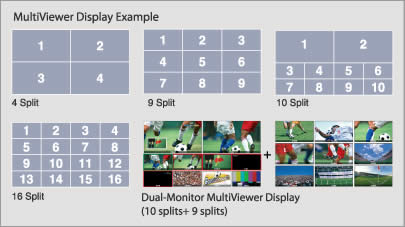 The AV-HS450 comes with a standard dual-monitor MultiViewer Display function. A maximum of 20 channels, including program (PGM), preview (PVW), and an input video signal can be simultaneously displayed on two screens. The exclusive feature lets you work comfortably with only two monitors, even at large-scale events. You can select from 4, 9, 10 and 16 split-screens.

The AV-HS450 offers advanced control of Panasonic pan-tilt camera systems,*1 including AW-HE120/HE50S/HE50H*2 HD Integrated PTZ Cameras. You can control one camera via direct serial connection, or up to five in conjunction with system controllers.*3 Up to 10 preset positions can be stored or recalled for each camera.

The standard redundant power supply increases reliability for use at live events. 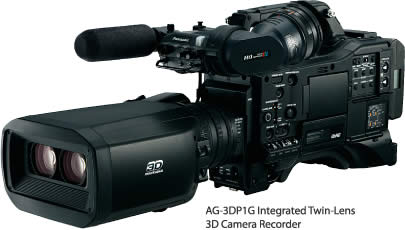 Mounting the optional AV-HS04M7D 3D SDI Output Board provides 3D compatibility. Eight pairs of 3D images standard, and a maximum of nine pairs of 3D images, can be input by dual SDI from 3D cameras and other sources, with two-channel bus switching. Transitions include cut, dissolve and wipe. Ideal for 3D sports acquisition, TV commercial production, and event recording.

The LR mix image output function allows the left and right channels of stereo 3D images to be checked on a 2D monitor. 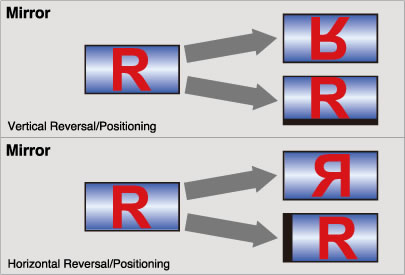 Vertical/horizontal reversing and position correction are possible for all 16 channels of SDI standard inputs. This helps to adjust the optical axis of a rig-type 3D camera when producing 3D footage.

This function overlays 3D video signal status monitor (brightness, RGB distribution, LR difference, grid) on 3D image onto the PGM output and PVW output (1/4 size only) of the MultiViewer Display. Being able to check the differences in the leaping effect and depth of the PGM and PVW without having to wear 3D glasses makes 3D switching easier and smoother. Even when 3D assist information cannot be displayed on the monitor or viewfinder of a rig-type or other 3D camera, this function will feed back PVW output to the camera so you can correct the brightness and horizontal/vertical positioning right on the camera.

This system features a large number of channels and functions, making it optimal for multi-camera recording in broadcast studios and image production applications, and for medium-scale production in studios and OB vans. 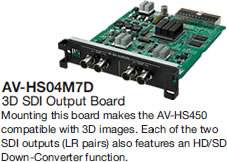 Mounting the optional AV-HS04M7D 3D SDI Output Board makes this system 3D compatible. The combination of AG-3DP1G/AG-3DA1 Integrated Twin-Lens 3D Camera Recorders and BT-3DL2550 3D LCD Monitors results in a high-level 3D production system. In addition to switching dual 3D images, it also has a number of correction assist functions for rig-type 3D cameras. The right chart system is an excellent example of an HD SDI configuration that requires no genlock.

17 other products in the same category: