This enhanced model, the HDW-M2000P, operates at the frame rates used for prestige and mainstream content creation and distribution. It offers HDCAM recording and playback at 1080/50i, 1080/59.94i, 1080/25P, 1080/29.97P, 1080/23.98P and 1080/24P. The HDW-M2000P is ideal as part of an end-to-end HDCAM production chain. It also makes business sense even when post production and programme distribution remains at 625/50 standard definition. An inbuilt HD to SD downconverter provides a standard definition output from your high quality HDCAM original recordings. Compatible replay of Betacam, Betacam SP, Betacam SX, MPEG IMX and Digital Betacam tapes also helps smooth your transition to the world of high definition.

With the rapid spread of HD in video productions, the HDW-M2000P Series provides a cost-effective and feature-enhanced HD solution focused on streamlining the migration process to full DTV operations. This is the latest HDCAM™ Series of products from Sony that have revolutionised the world of movie making since the first model was introduced in 1997.

In response to increasing demand for 24P-based HD programme origination, the HDW-M2000P Series accommodates recording at frame rates of 23.98PsF and 24PsF to serve as a cost-effective entry to CineAlta™ operations. The capability to output the converted 720P signals allows even greater flexibility in your operations.

Invaluable functions available in the HDW-M2000P Series include legacy playback of standard-definition BETACAM formats and built-in up and down conversion* capabilities for the crucial bi-directional exchange of programme material between SDTV and HDTV infrastructures. Other quick and easy functions enable frame-accurate editing, high-speed picture search as well as the smooth sync of audio signals with pictures.

The continually improving line-up of the HDW-M2000P Series allows you to select the most appropriate HDCAM VTR for your operational and budgetary needs. With easy maintenance in a wide yet affordable price range, each model offers different combinations of BETACAM format playback capabilities. All products operate in multiple modes, including 59.94i, 50i, 29.97PsF, 25PsF, 24PsF and 23.98PsF.

A wide choice of models with high quality and operability for which the HDCAM format is renowned ensures the HDW-M2000P Series offers an economically balanced solution for HD programming.

* Down conversion is not available for tapes played back at 23.98 and 24 frames.

surround sound reproduction is used on various media such

as DTV transmission and DVD. The HDW-2000 Series can

kHz). The HDW-2000 Series recorders are able to record

non-audio data streams within the audio recording area by

packaging the data within an AES/EBU wrapper.

Ancillary Data to be recorded on the tape. This "Metadata"

11 other products in the same category: 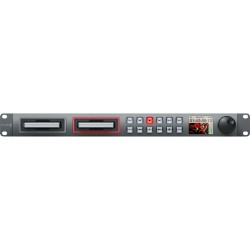 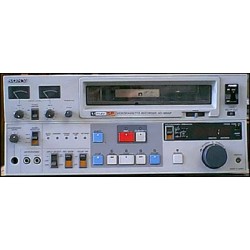